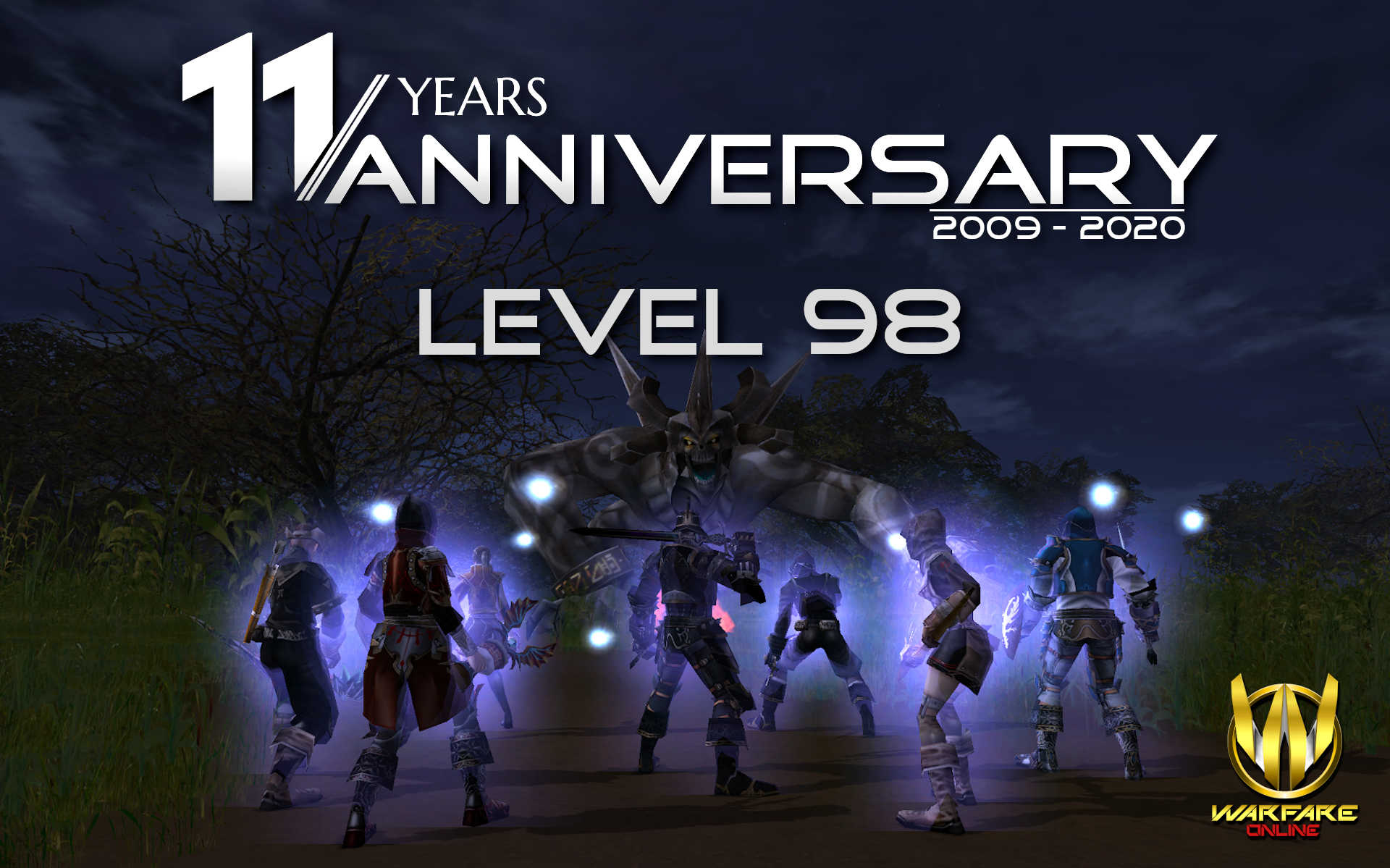 To bring an edge in terms of game mechanics, Warfare Online has decided to deliver a new element in-game to celebrate 11 years of running the server. This is by introducing a Maximum Level of Lvl 98 in 13th August 2020.

Here’s a breakdown of the update and the intentions of the game-play proposed:

24 Treasure boxes will be spawned every hour across Sainna Island, Misery Island and Caernarvon which will contain Metals including Tears of Sparda (TOS) and 5M EXP balls.
Purpose: Warfarians who love exploring maps, take this opportunity to hunt for treasure boxes! 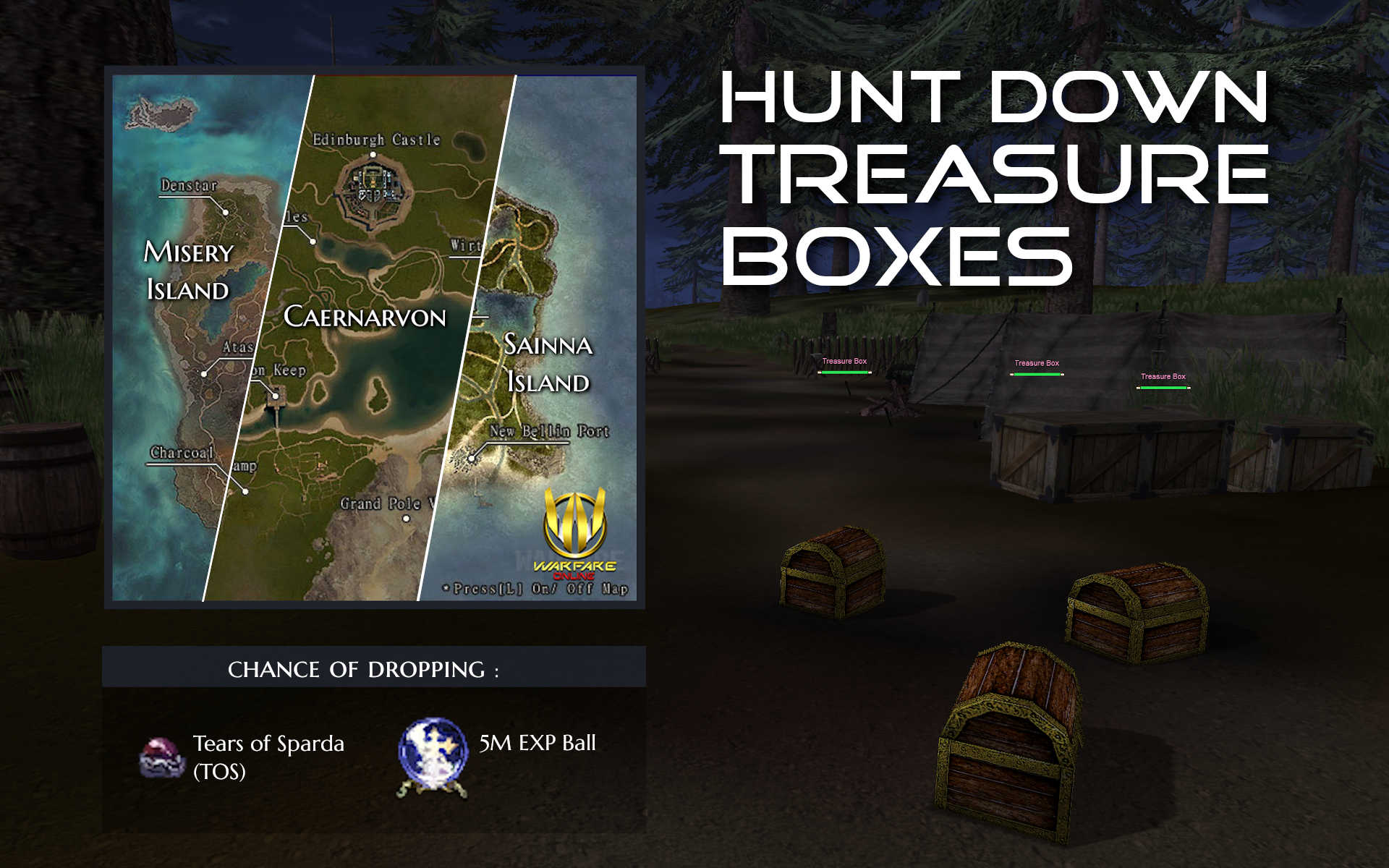 Bosses in Misery Island and Sainna Island will be spawned in the following schedule only. These bosses will not respawn again once killed. 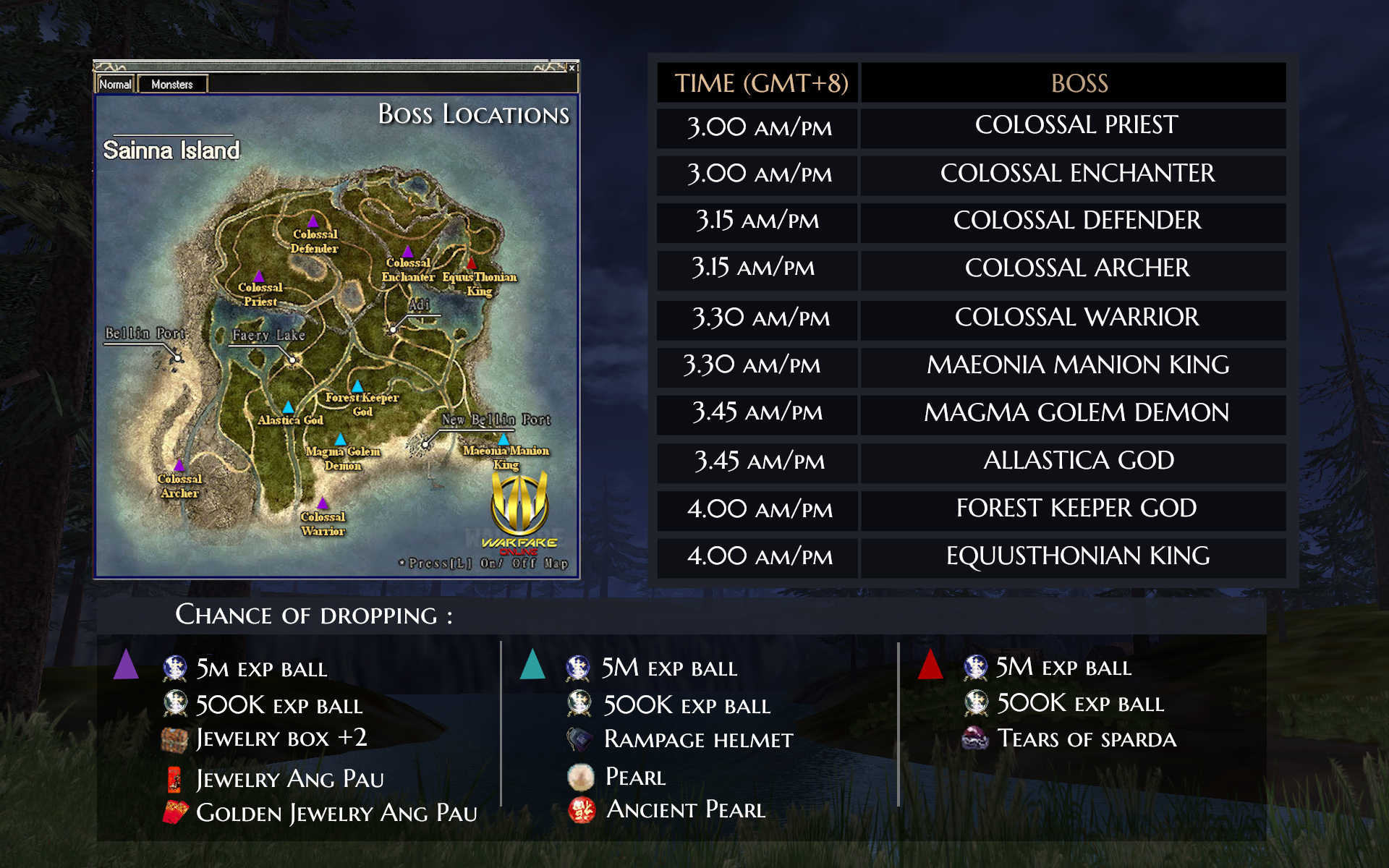 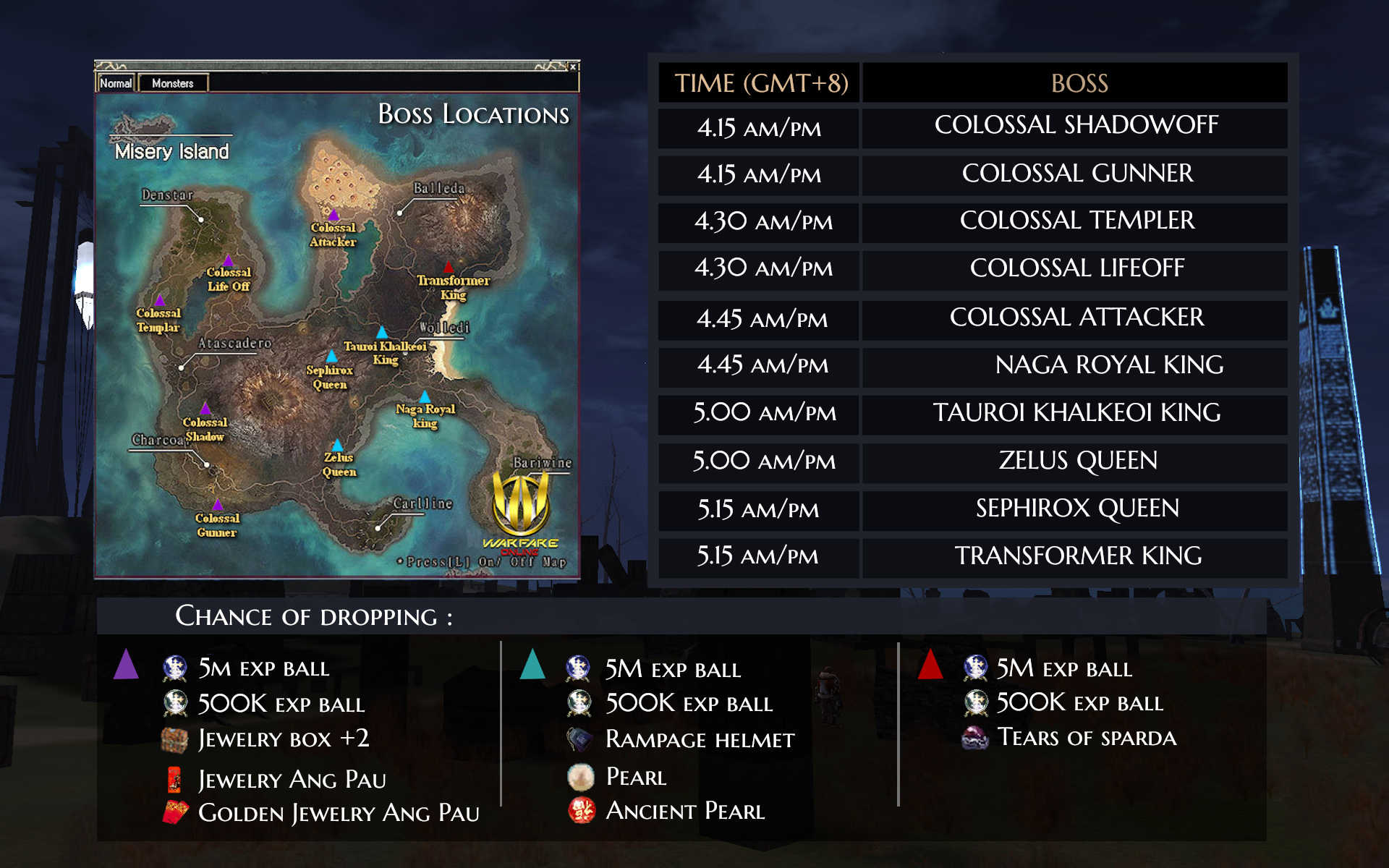 Bosses in Caernarvon will be spawned in the following locations. The Gorep King and Three Headed Queen has been relocated. Caernarvon bosses will respawn every 2 hours after it’s killed. 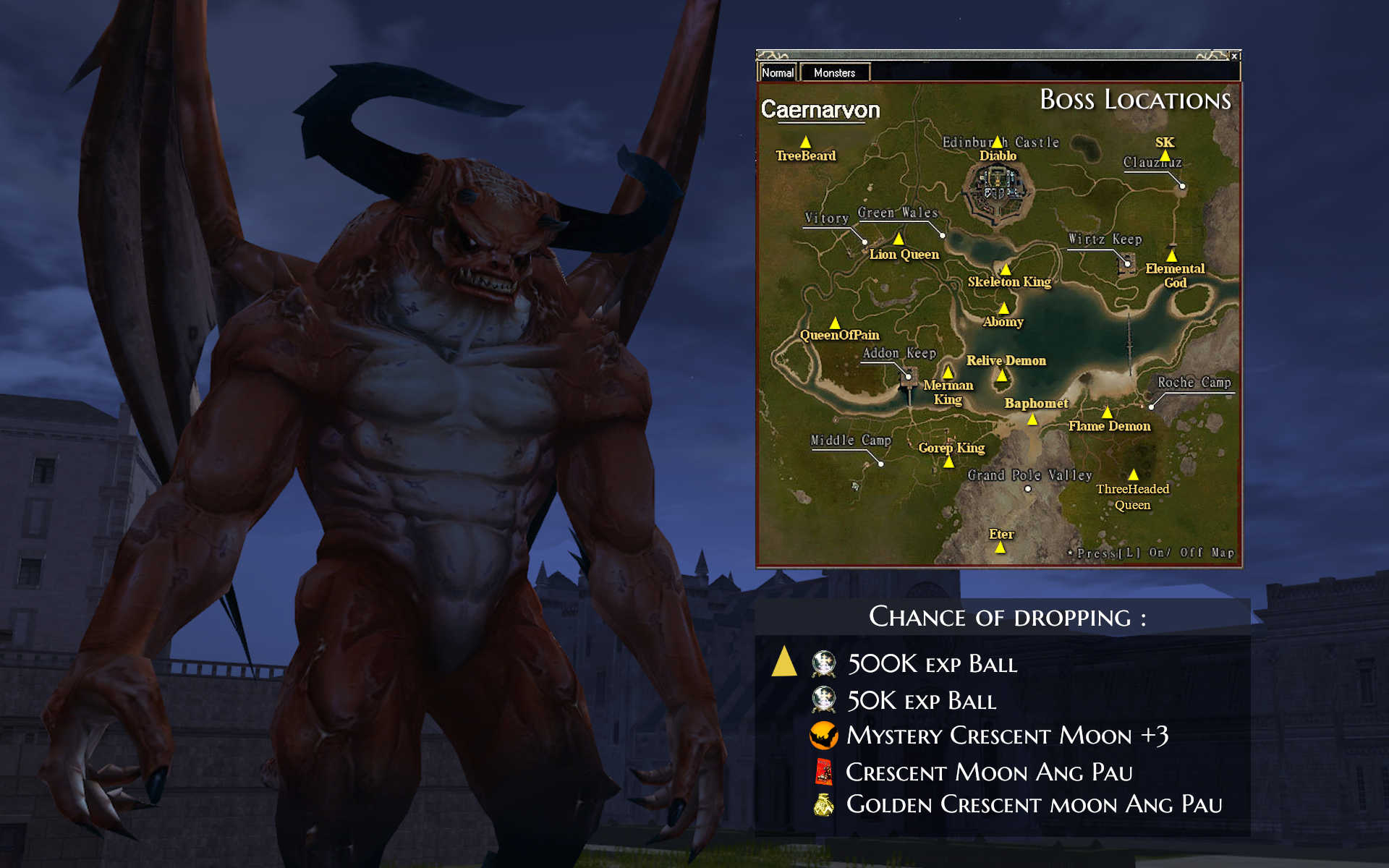 Solo and party leveling up to 97 will be much faster upon releasing the level 98 update. The EXP Ball drop rate for bosses and monsters are further improved. 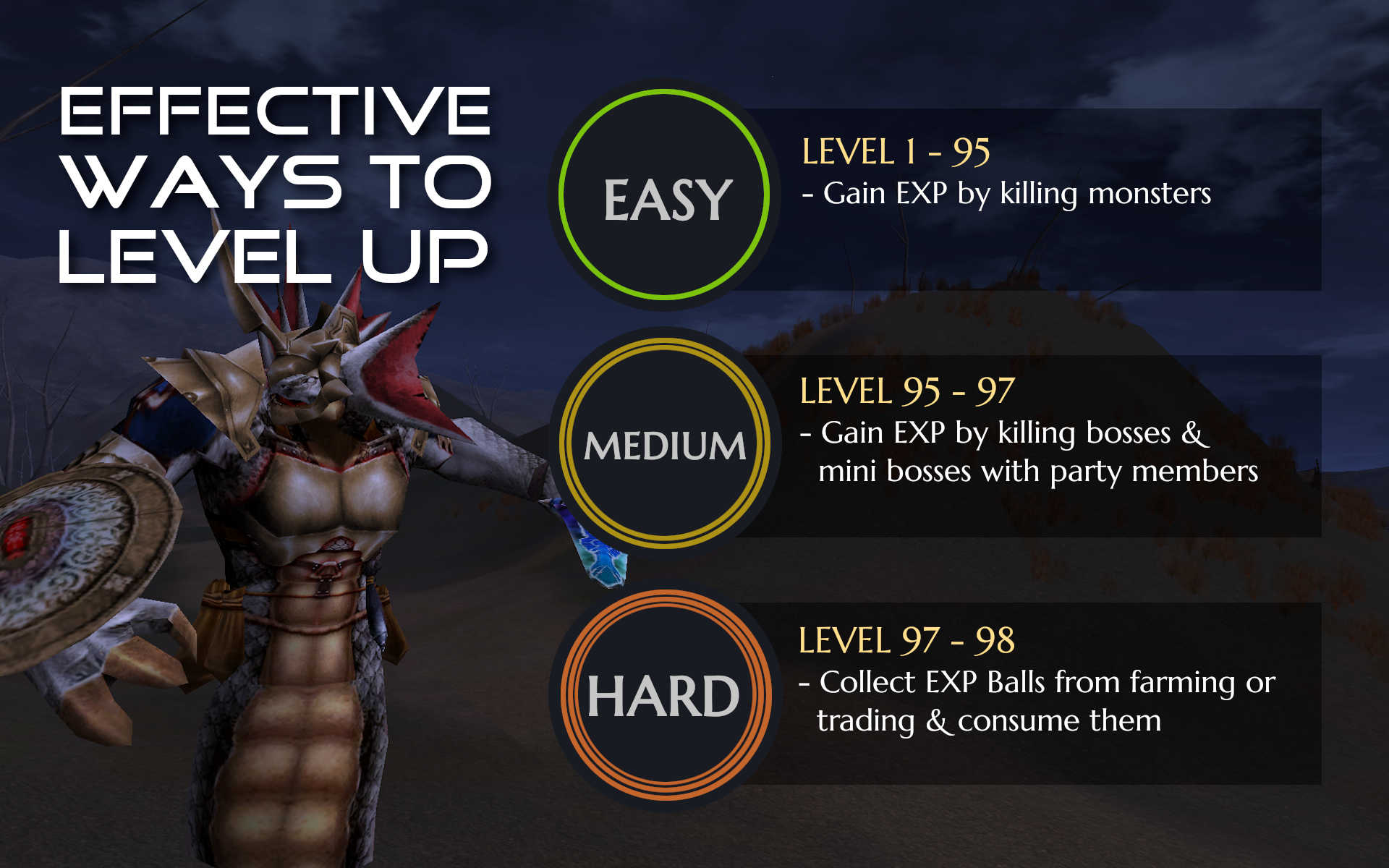 ~ An aspiration for veterans to guide and lead new Warfarians
~ A rise in hunts for EXP Balls as this will be the fastest way to level up from LVL 97 to 98
~ A new game-play of enemy territory raids with treasure boxes scattered in Misery Island, Sainna Island and Caernarvon
~ An initiation of battles between party’s and both races to conquer bosses for EXP Balls at a large scale
~ An increase in the number of Stalls in Mercatura that sells EXP Balls
~ A drive in the in-game economy with Warfarians prospering will be seen.

Keep in mind that leveling up to Lvl 98 is going to be a marathon and not a sprint! We intend to bring back the days when our community worked together. We believe working together by forming parties is one of the best ways to make new friends and strong bonds that last a long time.

Lastly, thanks to all our Warfarians who have been respawning for the past 11 years! Whether a spirited newbie, a loyal pro, a comeback legend, or an elite veteran, Warfare Online is proud to have all of you as part of this family!

Feel free to provide constructive feedback and suggestions on this update.

Regarding solo leveling , can you share some insights on what adjustment will be made for this, please? Thanks.

@whiteDevil
Our developers are still working on tweaking the level 98 update.
A detailed explanation will be released by 29th July 2020 to further explain the new game mechanics

so players also will encourage to up there level until max

Warfarians, based on the community’s feedback, we have updated the post.